Construction began in March on Phase I of the Villa Vision, a $5.8 million plan to bring new facilities, resources and entrepreneurial programs to Villa Montessori’s preschool-eighth grade campuses. An official groundbreaking ceremony was held on May 14 at the adjacent Mountain View Christian Church. 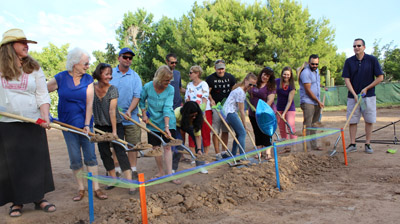 Margo S. O’Neill, Head of School at Villa Montessori School (fifth from left) is joined by members of the staff and school community in breaking ground on the school’s $5.8 million expansion (photo by Elizabeth Van Wie).

Thanks to a combination of donations and finalization of a bond initiative, major changes will be visible on all campuses by the start of the 2016-17 school year. Most notably, Villa’s two middle school locations will be unified on a single campus, just east of Villa’s early childhood campus near 28th Street and Campbell Avenue.

Phase I for the new middle school campus includes six new classrooms, an administration building and an alumni wall. Bringing the middle schools together in one location is the realization of a 10-year effort.

“Last year, we celebrated our 50th year as a school,” said Margo S. O’Neill, Head of School at Villa Montessori School. “So we created a plan to take a deliberate step with as much impact on the next 50 years as was taken by the founding families when they started Villa five decades ago.”

Upcoming improvements for the elementary campus include a new multipurpose room with stage (which will be available to the community), refurbished sports court, and extended shade structures at the pick-up and drop-off areas. On the early childhood campus, the playground space will be transformed with creative play and climbing structures, in addition to enhancements to the infant/toddler play space.

“With these new additions, including a working garden that will serve as a business for the middle school, students will learn real-world skills with emphasis on activities outside the classroom and in the community,” O’Neill added.

Founded in 1965, Villa Montessori is a school that serves 645 students in the Metro Phoenix area. The school currently has an early childhood campus, an elementary campus and two middle school campuses. Additional information about Villa Montessori is available at www.villamontessori.com.