Home / Features / Building a business from the ground up

Building a business from the ground up

Toiling under the hot Phoenix sun was the genesis for Stephen Walden’s idea for a better shovel. Hot and exhausted and with his muscles screaming with pain he had an epiphany in the garden.

“Everyone told me I was crazy,” he recalls. “So I took it to school and developed (the idea) there.” 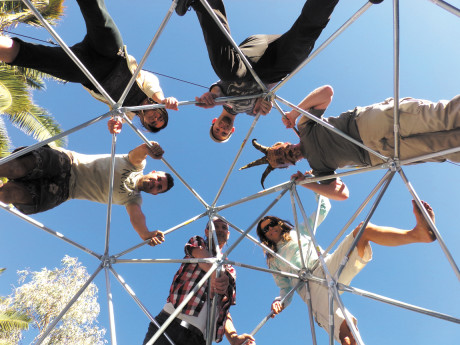 Now the North Central native and recent Loyola Marymount University graduate says everyone sings a different story. “They pretend they thought it was a good idea the whole way,” he laughs.

Phoenix resident Brian Korsedal, on the other hand, just wishes people would understand what he’s trying to do. His idea is to build digitally fabricated structures, like homes, from 3-dimensional models.

“I wanted to do a 3D printer for buildings,” he explains. “I think the people who are doing this are going about it the wrong way … they are trying to work with concrete.”

Korsedal instead is using steel bars that are cut to specification with a CNC, a computer numerically controlled machine. “It’s like a robot that does manufacturing. It will cut it for you, you just tell it what to do.”

“It’s been horrible,” he admits, “It’s not going anywhere.” Korsedal thought his idea would be a huge hit but he realizes now it’s hard for people to understand what, and how, he’s trying to create. “We’re weird,” he says. “We’re not like anything people have seen.”

People instantly get what Walden is doing. His shovel has a rotating ring in the mid-point of the handle and a slot to place your foot at the head of the shovel. It allows the user to have a better, more natural grip and gives the foot a more secure place where it won’t slip off. Together those features also allow the user more force when operating.

“It’s a new take on an old product,” Walden explains. “It’s a way to change a conventional item we’ve grown accustomed to, to a more efficient way of doing things.” 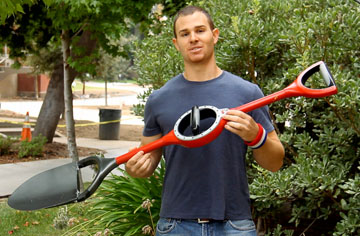 North Central native Stephen Walden brought in more than $60,000 in his Kickstarter campaign to fund his invention, an ergonomic-like shovel (submitted photo).

Walden came up with the idea before he started his senior year at Loyola Marymount in California. His final year he was able to perfect the idea and get a business plan together for his company, Bosse Tools. The Brophy College Prep alum is coming home in December to start a program at ASU’s SkySong Innovation Center.

He does have a partner, Aaron Gagleard, a classmate from Brophy who is graduating from ASU and already has his own business, The Swing Set Up, a golf training aid. Bosse Tools currently is going through an ergonomics study in San Diego. “We really want to have that data behind our claims,” he says. So they are using an independent firm to certify the tools are ergonomic.

Kickstarter was a good way to see if people wanted his product. “Luckily, our predictions were right,” he says. “We’ll be working with an industrial design firm to break down the intricate details of manufacturing.”

Contributors were also able to pre-order online, and Walden has more than 800 items already sold. He will fill those orders first once he gets his manufacturing up and running. Walden doesn’t want to put a firm date on that since he’s still working out details.

Bosse Tools is what he lives and breaths each day—and what he has sunk his life’s savings into. “This is my full-time job,” he points out.

To keep up with Walden’s progress you can visit his website at www.bossetools.com and sign up for weekly e-mails or place a pre-order. His shovels are selling for $79 and offer three basic designs. Eventually he hopes to have more tools such as rakes, hoes and anything with a handle.

Recently Korsedal had to move a structure he built at a downtown Phoenix location to another location. He and his volunteers literally rolled it down the street and attracted a lot of attention. They were prepared and handed out notes explaining their business. It reads, “We are on a quest to build computer-generated cities at music festivals with thousands of volunteers. Like Burning Man but permanent and sustainable. Please help us. Visit www.arcologynow.com.

He designs the structure on his computer and instructs his CNC to cut the bars to size. Instructions are printed on sticky labels and tell the assembly workers which piece goes where. Think Legos and Tinker Toys but for real buildings. Or as he puts it, “The DNA is the stickers.” It’s more than a tent structure because if you can dream a design, he can build it.

Korsedal doesn’t have a partner and he relies on volunteers to help him assemble his creations or those that are submitted by people around the world. He likens it to a modern barn-raising experience. “Just follow the stickers,” he says and in a matter of hours, depending on the size, you’ll have the skeleton of a home or a place to hold functions. His current structure is 15-feet tall and about 25-feet wide.

He offers pizza and beer for folks willing to show up, flash-mob style, and help build. He also has volunteers from the World Wide Opportunities on Organic Farms (WWOOF). Alex Fitch, a “wwoofer,” as the volunteers are called, is from New Jersey and arrived in September to help Korsedal after a friend told him about the idea. “I love erector sets. I’m good at putting Ikea furniture together,” he reasoned before heading to Phoenix to crash on Korsedal’s couch.

Still, he keeps dreaming. Korsedal believes he might even be ahead of his time. “We want to do cities with this … futuristic things.” For Korsedal, his company would be a house in a box with a structural price of $1.25 per linear foot of material.

“The technology works. We’ve already shown it works,” he asserts. “It’s the sales and the revenue we’re having problems with.”

You can learn more and even sign up for a Dec. 7 flash-mob building adventure by visiting: www.arcologynow.com or Arcology Now Inc. on Facebook.