CO+HOOTS, a small business that supports small businesses, isn’t so small anymore. That’s because the company founded in 2010 by Jenny Poon has just moved into its new space—and it’s three time the size of the original downtown site at 825 N. 7th St.

CO+HOOTS introduced a unique approach to co-working by combining the shared workspace model with community engagement programs targeted toward the next generation of entrepreneurs and leaders in the Phoenix area.

CO+HOOTS quickly reached capacity at its downtown location, which was inside a historic building that used to house one of the first downtown grocery stores. It later resettled into an old 1950s-era converted car repair shop at 1027 E. Washington St. 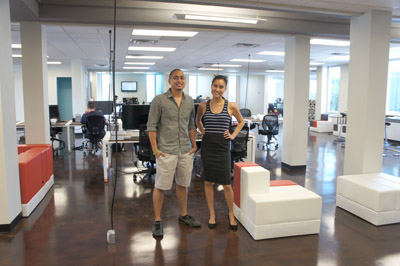 Odeen Domingo and wife Jenny Poon, co-owners of CO-HOOTS, stand in one of the large open shared working areas available at their new location, inside a 1960s midcentury modern office building at 221 E. Indianola Ave. The unique building is one of the few original structures raised up on stilts that remain in the Central Phoenix area (photo by Teri Carnicelli).

“We’ve moved three times in the six years we have been in business because of capacity issues since our membership kept growing,” explains Odeen Domingo, Poon’s husband and business partner.

Last year, Poon and Domingo approached LISC Phoenix about moving to a new location in the heart of midtown within walking distance of the Central and Indian School Light Rail station.

LISC Phoenix was formed in 1992 to work with local leaders to invest in housing, health, education, public safety and employment. LISC was able to provide both the loan for the acquisition of the building as well as the financing on construction and furniture to complete CO+HOOTS’ vision of establishing a foothold in the up-and-coming midtown Phoenix market.

In February, CO+HOOTS also launched an Indiegogo campaign with the goal of raising $50,000 to help reduce the loan amount for furniture, which is built into the cost of the loan. The campaign closed on April 9, having surpassed the goal by bringing in $53,655. Donations are still being collected at: tiny.cc/imincohoots.

Memberships range from $79 a month for WiFi, daily access to open flex space and unlimited access to programming, to $1,299 a month for a private office, free use of conference rooms and 24/7 access to the space.

The new facility also offers space for lunch-and-learn events and other business education programming, open to the public. Upcoming “Midweek Mindtweek” programs, which are 12-1 p.m., include: Ergonomics/Good Posture with Reenea Hernandez, May 11; Phoenix NAP, a global IT services provider, presented by Dan Weldon, May 18; and How to Keep Your Business Secure, by Yael Grauer, May 25.

“Our goal is to eventually offer educational programs every day of the week, as well as teach 400 kids entrepreneurial and coding skills a year,” Poon says.