By Teri Carnicelli
A popular mode of public transportation in Europe and a select few U.S. cities is coming to Phoenix later this year.

The Phoenix City Council on June 5 awarded a contract for a new bike share program. The winning bidder, CycleHop LLC, will begin the process of implementing a system of short-term rentable bicycles, which is expected to be in operation by December. 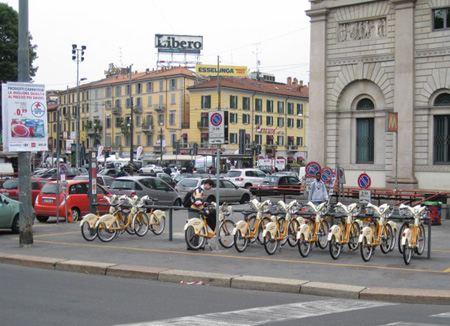 Milan, Italy is just one of the European cities where an automated bike rental system has been in place for many years, serving residents and tourists alike. This increasingly popular trend in public transportation is making its way to Phoenix by the end of 2013 (photo by Teri Carnicelli).

Mayor Greg Stanton announced the proposal for the Phoenix BikeShare program at his State of the City address in late February. “Creating an enhanced multi-modal transportation system in our city requires options that go beyond roads and public transportation,” he said.

“These options must also include bicycle and pedestrian improvements. A bike share program, where residents and visitors rent a bicycle to complete a trip, is a critical improvement to our city’s overall transportation network.”

During the first year of the contract, CycleHop will establish and operate a bike share network that will include up to 500 bicycles throughout the city of Phoenix. Access to the network can be obtained by making a reservation via the Internet or a mobile device. Short-term bike share users will pay about $5 to access the system for the first hour and then pay $2 for each additional half-hour period, with a daily maximum rate of $25.

Annual members will pay less to access the system, with similar rates after the first hour of use.

“Phoenix deserves to be one of the most bike-friendly places in the country, and this new partnership is a great next step,” Stanton said. “By developing this BikeShare program, we’re reminding residents and visitors alike that traveling on two wheels is a great way to see what Phoenix has to offer.”

The city’s BikeShare system will have the flexibility for other cities, potentially including Tempe and Mesa, to join if they choose, “ensuring our BikeShare can become part of our regional transportation system,” Stanton added.

The bicycles provided as part of the bike share program will use a GPS-enabled locking mechanism designed to connect with special hub locations. The bikes also will be able to lock at traditional bike racks if necessary.

Additional benefits to the city are the potential cleaner air, with more trips being completed with zero carbon emissions, and the overall health benefits in providing a means for the city’s residents and visitors to be more active.

The city also hopes to maximize the investments in its bus and light-rail system by furthering its reach. Some people will only walk a particular distance to utilize public transit, but BikeShare could extend the distance someone is willing to travel to reach a transit stop, extending the reach of the transit system to more residents and businesses.