For longtime North Central resident and TV personality Dan Davis, it’s been a heck of a ride. After being a fixture on KTVK Channel 3’s Good Morning Arizona for a couple of decades, he was laid off. Not too long after that he teamed up with another former Ch. 3 co-worker, Suzie Guzman, and together they started “Good Grief Productions.” He pitched the idea of turning AAA magazine articles that he wrote on a freelance basis into a TV show, and the program was born. 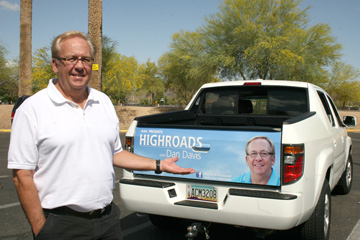 Dan Davis is becoming quite the globetrotter for his “AAA Presents Highroads with Dan Davis” television program, which travels to New England and Quebec this season, as well as some international locales (photo by Patty Talahongva).

And now he’s reaching a far wider audience than just Arizona, and his travels are taking him well beyond the state’s borders.

For its fourth season, the award-winning travel and lifestyle show, “AAA Presents Highroads with Dan Davis,” is expanding into two new markets.

In season three, the show expanded to Colorado. For season four, which kicked off on Oct. 27, the show will begin airing in North Carolina in early 2014.

“We’re beyond thrilled that the show has been picked up by other markets,” said Davis. “We’ve made a strong connection with viewers in Arizona and Colorado, and look forward to doing the same in North Carolina.”

This season, Davis will cruise New England on a AAA member cruise, explore Quebec and cross the pond with visits to Ireland and Italy.

“As a go-to travel source, we’re elated to see the show expand beyond Arizona,” said Paige Chadwick, vice president of marketing for AAA Arizona. “The show has been a huge success in Arizona, and we know our viewers will be happy to share Dan with other households across the country.”

Viewers can like the show on Facebook and watch full episodes online at AAAHighroads.com. Fans also will be able to purchase the show on DVD at AAA offices and online starting in mid November.