It has been a tough year for two longtime family businesses in the North Central community. Spinato’s Italian restaurant and pizzeria had planned to move into its new location almost a year ago but problems with the building it purchased at 7th Street and Missouri Avenue caused major construction delays.

And Karl’s Bakery and The Baker’s Daughter, which in August were given just 10 days to vacate their established location at 7th and Dunlap avenues, found a new location just down the road but were plagued with a lack of necessary electrical power, permit delays, and other remodeling issues.

Both family businesses plan on opening the doors to their new digs before the end of the year, and each hopes their loyal customers—and maybe some new ones—will find familiar favorites under a new roof. 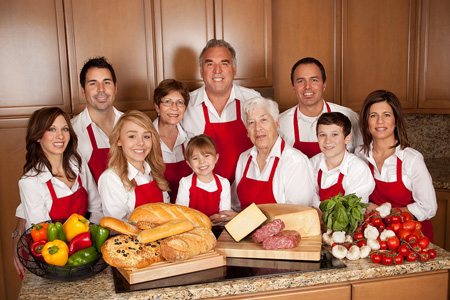 Known for its homemade Chicago-style pizza, pasta dishes, sandwiches and salads, Spinato’s has been at its present location at 12th Street and Glendale Avenue for 18 years, and has been a Valley favorite for 39 years.

After fully remodeling the old Manuel’s restaurant at 5509 N. 7th St., the new Spinato’s will open for take-out and delivery on Nov. 11, and the dining room will be open for dine-in guests starting on Nov. 25.

The bar will feature its own food and drink menu. It will open up to the outside patio area and will accommodate 28 patrons at the bar and have additional seating for 50 at lounge tables in the bar area.

With the opening of this new restaurant, the Spinato family is rolling out several new concepts, including the Andiamo Marketplace, featuring a wide variety of coffees, cappucinos, espressos, seasonal salads, homemade soups and pastries. It will open from 6:30 a.m. to close each day, and during lunch hours it will offer a wide variety of “grab-and-go” healthy lunch options such as soups, salads and other healthy selections.

New regular menu items include seasonal pasta dishes, salads, sandwiches and desserts and a pizza of the month created by Spinato’s staff.

Ken and Elaine Spinato opened their first location in 1974, after relocating from Chicago. Today their children, Anthony and Nicole, as well as many other family members are involved with the day-to-day running of the operation, with Ken still at the helm.

The family has always prided themselves of using only the highest quality ingredients; their homemade sauces and other items are made from family recipes in their Tempe kitchen and delivered to each location daily to insure the quality is always consistent no matter which location a guest visits.

“We are very excited to open our newest and largest location in central Phoenix, and a little sad to see our Glendale location close, but it was just too small to accommodate the growing demand for our food,” explains Anthony Spinato, vice president of Operations for Spinato’s Pizzeria and president of Spinato’s Fine Foods. “We are extremely fortunate to have loyal guests that keep coming back again and again. We owe our success to our guests and our exceptional staff that make our guests feel welcome and give them a great ‘Spinato’s experience’ each time they visit.

“To us, are guests are an extension of our family,” he adds.

Hours at the new location will be 11 a.m. to 10 p.m. Monday through Thursday; 11 a.m. to 11 p.m. Friday and Saturday; and 12 to 8 p.m. Sunday. The opening of this location will coincide with the closing of the existing Glendale Avenue location.

Karl’s Bakery and The Baker’s Daughter

Karl and Stefanie Boerner started Karl’s Quality Bakery in 1994. The “quality” comes from Karl’s training as a baker. He is Swiss but was born in Germany and received his training as a pastry chef in Cologne. He studied chocolate in Switzerland and also is a chocolatier.

But it’s been tough going the last few years, as their rent in the small strip mall was doubled after contending with a series of ever-changing property owners. In 2008 they signed a five-year lease; and in August of this year they were given less than two weeks to vacate both spaces.

“We moved out in three days,” Christine says. “We must have had 50-60 people help … customers, friends, neighbors. It was amazing. I was crying the whole day; I wasn’t expecting that kind of response. We had contractors come with forklifts.

“We could not have done it without them,” she points out.

That strong community support means a great deal to Boerners. It’s helped make their small business successful through the years. And now they are hoping that loyalty will continue on at their new location, which will be in the Marketplace @ Central shopping center located at the southeast corner of Central and Dunlap avenues, just a stone’s throw down the street from their old location.

“We like it here,” Stefanie says. “My kids went to Sunnyslope High School. We’re a part of the community. This is our pride.”

However, it hasn’t been a smooth transition, by any means. The two businesses will be sharing one large space, and it was discovered the existing electrical power couldn’t accommodate all their baking equipment. To upgrade the electrical would have cost them more than $10,000. They finally came up with a compromise solution that included converting some of their baking equipment to gas.

Since the family doesn’t want to leave its loyal customers in the lurch during the holiday season, Karl’s and The Baker’s Daughter will be taking holiday orders over the phone, including pies, yule logs, specialty chocolates, and other seasonal favorites. They have reached an agreement with French Grocery, located at the southeast corner of 7th and Missouri avenues, for a pick-up location for holiday orders. In addition, French Grocery also will be carrying some of Christine’s chocolates and other goodies in the store.