Don’t overlook Otro, the ‘other’ place 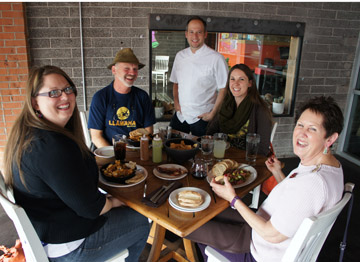 During construction, Robson responded to phone callers trying to track him down by saying he was at the other place. Eventually he decided to name his new eatery just that.

He had spent a few years looking for a good location in his neighborhood. “I know the area, I live on Morton Avenue right up the street,” he says.

Diners can expect some similarities to Gallo Blanco dishes, such as the Mexican flavors and flair. Robson was born in Mexico and loves the food. For him, Otro is just an extension of what he enjoyed as a child. He says he grew up in a food-centric home where both his parents cooked and encouraged him as well. At age 5 he started exploring the kitchen and at 7 he started cooking for not just family but friends as well. His food remains infused with his heritage.

He uses a rice from Spain called Calasparra in his paella. It is a short-grain rice that’s very hardy. Flour tortillas are made from scratch daily. Mole also is on the menu, and it’s fast becoming a customer favorite. Tacos are especially welcome by the lunch crowd. You’ll notice there’s no cheese on the tacos because they don’t put cheese on tacos in Mexico.

“We cook everything from scratch, and we use local purveyors,” Robson says. “We are making sure it’s nourishing for people to eat here.”

If you’d like to request a change, Otro can accommodate your dietary needs. Each gluten-free item is marked with a GF on the menu. If you’re unsure, ask your server for suggestions.

One Mexican appetizer you must try is the Elote Callejero. “It’s something you get all over Mexico so we just stay true to that ideology,” Robson explains. The simple dish is a roasted corn-on-the-cob coated with Cotija cheese, mayo and smoked paprika.

“We do offer to take it off the cob,” he adds—just ask your server to slice it for you, otherwise be prepared for the juicy kernels to explode around the table.

Happy Hour is from 2 to 6 p.m. every day and besides the typical margaritas you will find a full bar with some unique wines. “We have a great collection of wines that we select,” Robson points out, including some selections from South American and Spain and not available in stores.

Breakfast is served all day and brunch on weekends. Robson says once in a while he likes omelets for dinner so it’s nice to have that option late in the day. He highly recommends the flapjacks. “In Mexico flapjacks are very special,” he says. They are a street food, rolled up with fruit compote and sold by street vendors. At Otro you will get your flapjacks served with pure maple syrup.

The atmosphere is bright and open. “We wanted to really make it feel comfortable for everybody, like you were in somebody’s home,” Robson says.

It’s the perfect time of year to enjoy the patio, which seats about 20 people. There is a railing to lock up bikes, which can accommodate about 10 bikes.

Robson joined in his restaurant business with his wife Denise and his brother, Tony, as well as a few silent partners. They have a lease on the space for 15 years and are looking forward to serving food to everyone from neighborhood residents to busy business-types during the week and the lounging crowd on weekends.