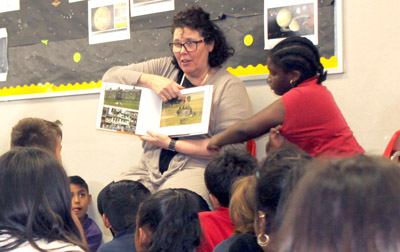 Arizona REALTOR® Kerry Melcher reads to children at the Harry & Sandy Rosenzweig Branch of the Boys & Girls Club in Phoenix as part of National Tell A Story Day on April 27 (submitted photo).

The Arizona Association of Realtors hosted a community service project on April 27 with the Boys & Girls Club. More than 40 real estate agents volunteered time at nine Boys & Girls Club branches, including the Harry & Sandy Rosenzweig Branch in Central Phoenix, reading and talking with students for National Tell A Story Day.

Arizona real estate agents from the White Mountain, Western Pinal, Flagstaff, Yuma and Phoenix worked with their local Boys & Girls Club branches to arrange a reading day for the club’s younger members. Volunteers developed lesson plans that included crafts, discussion time and reading books such as “The House That’s Your Home” by Sally Lloyd-Jones and “If I Built a House” by Chris Van Dusen. More than 100 children across the state were mentored during the day’s activities.

The project was part of an ongoing partnership between the National Association of Realtors and the Boys & Girls Clubs of America.