North Central resident Michael Young was recognized as Volunteer Rookie of the Year by the American Red Cross Greater Phoenix Chapter. He was among nine men and women presented with Red Cross volunteer awards during a celebration on April 16. 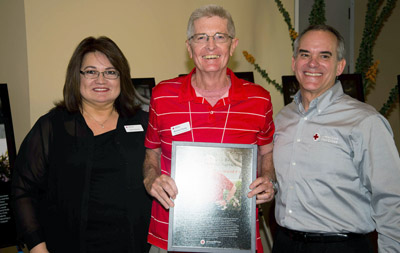 He teaches Psychological First Aid and he is one of the first qualified teachers for the new Integrated Care and Condolence Teams.

“Michael has a passion for helping people and he is able to inspire our DAT volunteers to excel and want to become better at assisting our clients,” said Red Cross volunteer Leah McCormack, who nominated Young for the award. “He is a very positive person and people love to go on calls with him because his attitude is contagious. He is very organized and professional which make a scary situation (both for the client and the volunteer) seem less daunting.’’

Young, 69, said he volunteers for the Red Cross because he wants to be of service to others.

“What I have enjoyed most is the immediate positive impact I can have on the lives of others. It is real and happens every day. Through my actions, I can treat people with dignity and compassion in their darkest hour,’’ he said.

For more information about volunteering, call the Red Cross Greater Phoenix Chapter at 602-336-6660 or go to RedCross.org/Arizona.