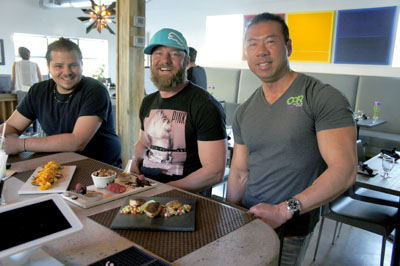 What does a guy do when he doesn’t cook, eats out every night and comes from a family who owns restaurants in London, Hong Kong and France? He opens his own restaurant.

CoR Tapas (4500 N. 12th St.) is Corey Chan’s answer to his own need for dinner and, as he sees it, it’s a place where locals can come, relax and enjoy sharing a few items with friends over a glass of wine or imported beer. “It’s not really Spanish but European,” he explains.

The name is a play on words and his own middle name. CoR is like the center, a central meeting point and of course it’s the start of his name. He opened CoR in November 2015 after convincing the former owners to sell him the building. It used to be a stationary and satellite post office center that Chan often frequented. One day while buying stamps he asked the owners if they wanted to sell the property. He had been looking for a location to open a restaurant and had spent a lot of time driving up and down Camelback Road searching for the perfect spot.

Chan liked the location because of its close proximity to Camelback but also because it’s in a neighborhood. Once the deal was made, he applied to have the zoning changed to accommodate his restaurant.

The 1940s building started its life as a meat packing facility before eventually becoming a stationery store. A lot of work had to be done to bring the plumbing and electrical up to code, and the interior was basically gutted and entirely redone. The adjacent gravel parking area was paved, and the former garage/storage area was turned into two brand-new, ADA compliant single stall restrooms.

Since opening, CoR has attracted several repeat customers and perhaps that’s due to Chan’s fussing over the menu. “You can customize your tapas,” he says. Chan helped craft the menu by inviting other chefs, restaurant owners and one friend in particular who was a very picky eater to taste test the menu. They tried out the first menu items and gave him feedback on what they liked or didn’t like.

For lunch (launched in March), try salads, soups, pastas or sandwiches ranging in price from $9 to $14. The dinner menu includes 15 different tapas including Spicy Scallops, Dates and Papatas Fritas Aioli. These smaller dishes are meant to be shared and range in price from $9 to $18. Customize a CoR Board or try one of the Artisan Bruschetta Boards.

Since it is a European tapas restaurant, CoR serves European beers in bottles. It’s a chance to try beer from the Czech Republic, Italy and Germany—beers not often found on local menus. There also is a housemade sangria and craft sangria. Other alcoholic drinks include the unique Lemon Quench.

Finish a meal by ordering one of the two desserts, the Triple Delight chocolate torte and the Affogato vanilla gelato. Both items are made in house.

Chan says his kitchen doesn’t have a microwave or a freezer and the food is freshly prepared. His general manager is Ray Sinelli. Michael DeFilippis and Samantha Wong make up his chef team.

Chan says he wanted to have a place where the staff are attentive but not hovering. “They won’t ignore you,” he says. “Your water glass will be refilled promptly.” Chan says he appreciates good service and promises that his guests will have that same type of service.

He also enjoys meeting his customers and often works nights at CoR. He says some guests stay four hours and just visit, which he loves. He’s often drawn into conversations and has an interesting life and background, which he shares with his guests. He’s lived and worked around the world and currently is working for the government of Estonia.

In the future, as the business grows, Chan may add a weekend brunch to the evolving menu. For now he’s pleased with investing in his own neighborhood.

Taking a cue from his regulars who love the relaxing ambiance, he’s decided to use the term, “Relax Hour,” instead of Happy Hour because it suites the atmosphere. “We’ll take care of you,” he says of the restaurant’s mission.

Follow CoR Tapas on Facebook or visit www.cortapas.com to see special menu items or special events such as Flamenco dancing, Date Night, Wine Wednesday with half-off a bottle of wine, or wine and paint parties. There usually is live music on Friday nights.

Relax Hours are Tuesday through Friday from 5-7 p.m. at the bar. CoR Tapas is closed Sunday and Monday. Extra parking is on Campbell Avenue or in a lot to the west. For more information or to make a reservation, call 602-264-8471.

Patty Talahongva is a Hopi journalist, documentary producer, and news executive. She was the first Native American anchor of a national news program in the United States and is involved in Native American youth and community development projects. 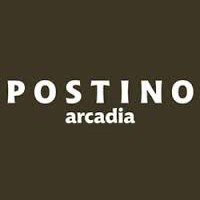 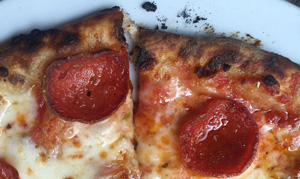 Pizza festival coming to the park