By Patty Talahongva
When Woody and Victoria Johnson opened their Macayo’s restaurant at 3831 N. Central Ave., most likely they had no idea what kind of family business and legacy they were starting. This month the restaurant, which is still family owned, celebrates 70 years of service. At the helm is their only daughter, Sharisse Johnson, who is CEO and who her father affectionately dubbed, “little one.” Her earliest memories are of being in the restaurant and helping out as a hostess, seating guests when they arrived. 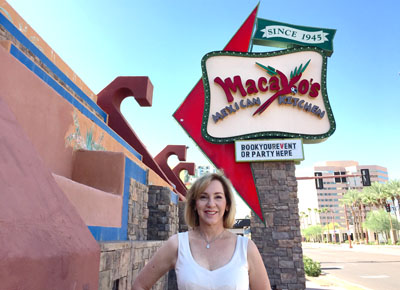 The recognizable Macayo’s on Central, which opened in 1952, is making way for a 225-unit apartment complex. Sharisse Johnson, CEO of Macayo’s and daughter of the original founders, Woody and Victoria Johnson, says they hope to be able to save the sign designed by her mother and incorporate it into the new building that will be just across the street on the south side of Indianola Avenue (photo by Patty Talahongva).

“It was fun coming to work with daddy on Saturday, “ she recalls. “It was fun talking to customers.” She did it all, from busing tables to helping out in the kitchen. Her brothers, Gary and Steve, also are involved in the family business.

Woody’s mother was from Mexico and didn’t speak English. His father came from Sweeden. Woody served in World War II and came home to Phoenix, where he worked in his brother’s restaurant for a year. In 1946, Woody and Victoria opened their first restaurant at 37 W. McDowell Road. It was big enough to fit six tables and a counter. Five years later the coupled opened a second larger restaurant with 10 tables.

As Woody worked at the restaurant, Victoria kept her day job at a bank and at night helped out at the restaurant. “She always had great financial skills and kept a good eye on the business as it grew,” says their daughter. Those skills included savvy saving habits and by 1952 Victoria had saved enough money to help them buy the property near Central and Indian School Road. It was to become the first Macayo’s.

Macayo’s doesn’t mean anything in any language except the language of Woody and Victoria. She loved macaws. Woody’s first restaurant was called “El Nido,” the nest. They put the two concepts together and came up with the name. She wrote it out and the iconic sign still bears her signature M with a flourishing swoop complete with a macaw bird.

The Macayo’s brand has grown to13 locations in Arizona and Las Vegas, with more than 1,000 employees and hundreds of tables. Today several extended family members work in the restaurants and related businesses. Son Gary owns and operates a canning company where all Macayo’s sauces are made for shipment to customers. The company gets many requests from customers who have moved away from Phoenix and still crave Macayo’s flavors.

Through the years Macayo’s on Central has helped guests celebrate birthdays, weddings, anniversaries, graduations and every special occasion. An estimated six million customers have walked through the doors to feast on the family recipes.

Woody was strict when it came to executing the recipes. In the beginning they used chilies with mild flavors such as Anaheim chilies. Gradually they added more spicy chilies such as poblano and chipotle as customers got used to the hot and spicy flavors.
“We make our sauce daily in the restaurant,” Johnson says. “We do not open cans for salsa. No way would I allow that,” she asserts, speaking like her father’s daughter.

The ground beef mixture for the chalupas is made twice a day to ensure the “flavor profile” is just right. Chilies are fire roasted in the morning daily and today the only “Gringo” food on the menu is a kid-size hamburger. If an adult orders one, they double the meat.

“I was blessed with the work ethic my parents had,” Johnson says. She’s also appreciative of her father and the customer loyalty he built. “People loved him,” she says. “That’s probably what built the culture.”

The actual 70th anniversary date is Monday, Sept. 26. Every single Macayo’s location will celebrate that day with 70-cent shredded beef tacos and red cheese enchiladas. The regular menu price is $4.99. These are two of Woody’s favorite dishes and the rollback price honors him and his first menu.

The 70th anniversary also comes at a time of great change for the decades-old family business. This summer Johnson announced plans to move out of the Central Avenue location to a site just across the street on the south side of Indianola Avenue, in the space formerly occupied by an automotive garage. The unique, eye-catching and colorful building that has been synonymous with Macayo’s for decades was sold and will be torn down to make way for 225 high-end apartments.

“A lot of people say it’s so sad,” Johnson says and adds, “For me it’s so exciting. I’ll have the iconic menu in a new place.” She is working with the city of Phoenix to keep the familiar sign but Macayo’s will say goodbye to the unique architecture of the building on Central Avenue. But no worries, the restaurant’s unique exterior replicating a Mayan temple is immortalized in the 1969 movie, “Chastity,” starring Cher.

The restaurant will remain open at this location through the end of the year. The new location, which will have a smaller footprint and a mid-century modern feel, will open the first quarter of 2017. Follow Macayo’s on Facebook to keep up with events and construction plans through the transition.