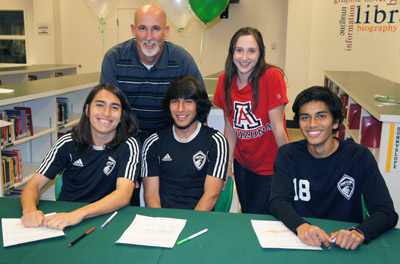 Sunnyslope High School hosted its first-ever student athlete Letter of Intent (LOI) signing event on Feb. 3 in the Media Center. Families, friends, coaches and teachers were on hand to celebrate college-bound athletes from soccer and volleyball as well as the school’s first triathlete. 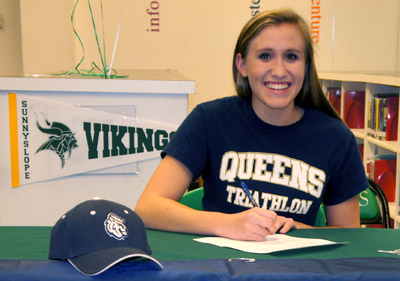 Rebecca Meyerson is the first student in Arizona to receive an NCAA scholarship as a triathlete (photo by Teri Carnicelli).

Rebecca Meyerson is the first student in the state to receive a triathlete scholarship from the NCAA. She was a club swimmer most of her life and also swam for Sunnyslope for three years and ran cross country and track all four years, clocking in at a less-than 6-minute mile. She was named to GUHSD’s 2nd Team All Section for Cross Country, and received the school’s Viking Award for excellence in athletics. She also takes a heavy AP course load and has at 4.2 GPA.

What’s probably most remarkable twas that she qualified to compete with her future college team from Queens University (Charlotte, N.C.) at the NCAA Women’s Sprint Triathlon National Championship on Nov. 7, 2015, in Clermont, Fla. Rebecca came in 41st overall after swimming 750 meters, biking 20 kilometers and running 5 kilometers.

Brynn Moga has accepted a soccer scholarship to play in the PAC 12 with the nationally ranked University of Arizona Wildcats. Brynn has been on the high school All State team, was named 1st Team All District and 1st Team All Section for 2015, and was Division Player of the Year last season and again for 2016. She also plays for the SC Del Sol Soccer Club and was one of the club’s team captains this season.

Note that none of the section results had been released for 2016 at press time.

Four volleyball players also were on hand to sign their Letters of Intent.

Skylar Wine has been accepted to the University of the Pacific in Stockton, Calif. According to her coach, Amber LeTarte, not only was Skyler the No. 1 outside hitter for most of her years on varsity, she also was an offensive leader as well. She has won numerous athletic awards including 1st Team All Section Hitter, Division 1 2nd Team, and 2014 All Arizona Team. Skylar is a member of the National Honor Society, the yearbook senior editor, and volunteers at the Arizona Humane Society. 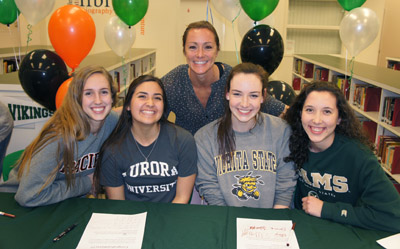 Sarah Marinez will attend Aurora University. Sarah was on the varsity team at Sunnyslope all four years. She fires her team up with her competitive attitude and with a great work ethic. Her awards include 2nd Team All Section Libero, 1st Team All District, Division 1 Honorable Mention. She wants to become a speech pathologist.

Emma Wright will play volleyball for Wichita State University. Emma shuts people down with her huge block and is an offensive threat. Her coach says Emma always has a positive attitude and words of encouragement for her teammates. Her awards include 1ar Team All Section Hitter, 2nd Team All State, and Sunnyslope High School’s Biggest Block. She plans to study environmental and physical science.

Katie Oleksak will attend Colorado State in the fall. She served as captain her junior and senior years. Katie was lauded by her coach for being consistent, calm and controlled, as well as having “uncanny court awareness.” Her awards include Under Armor All American Third Team, All Arizona Team, Sunnyslope High School Most Valuable Player (MVP), Division I 1st Team, and United Dairymen All American. She plans to major in health and exercise science. 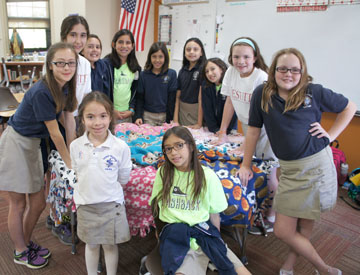 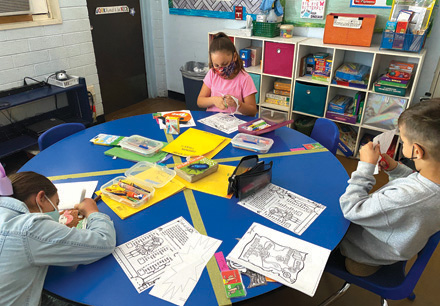 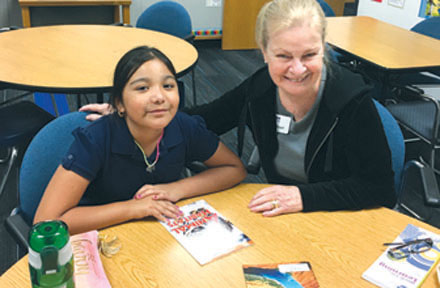