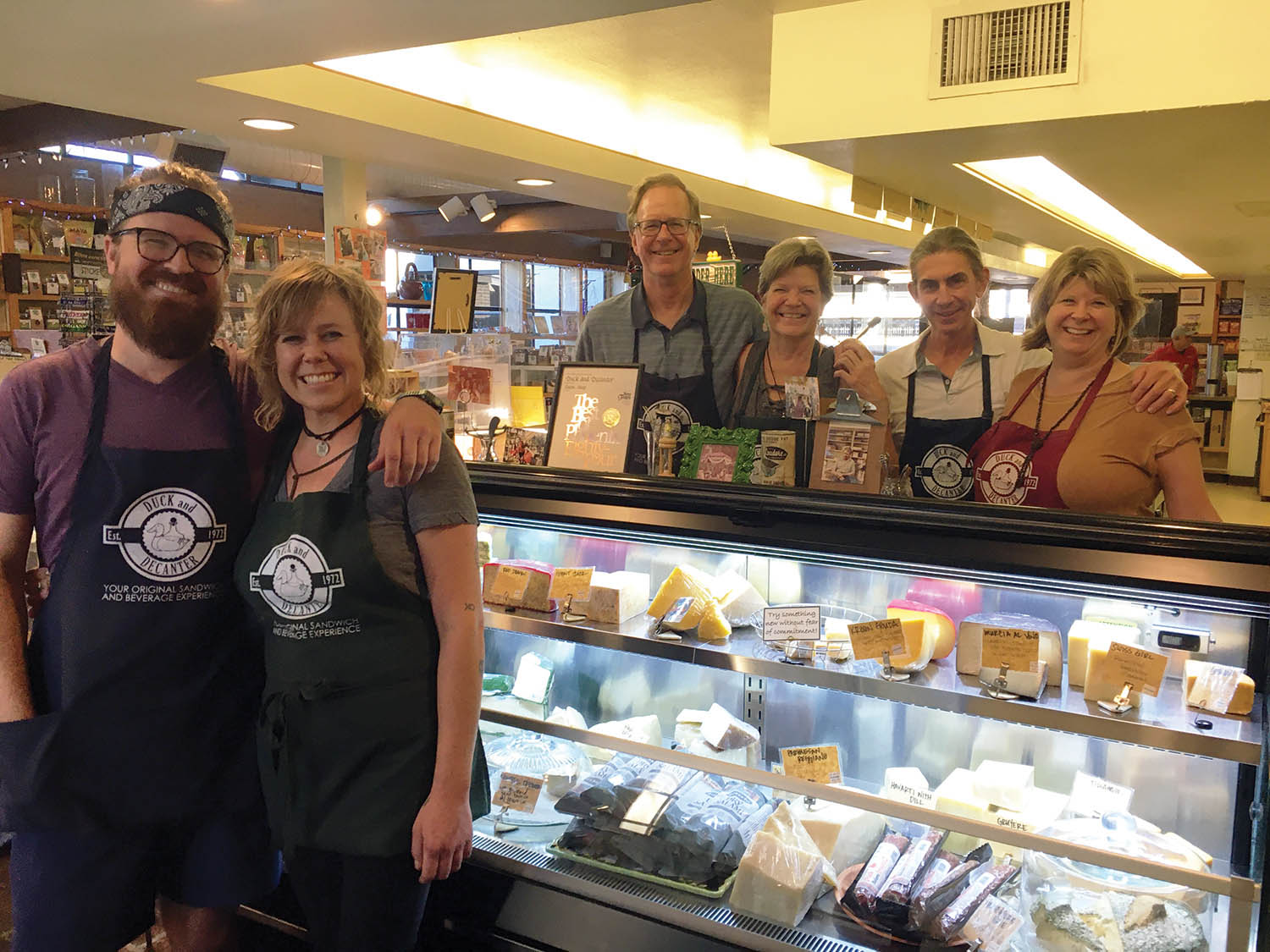 At Duck and Decanter, operating the business is a family affair. In back row, left to right, Randy Mettler, Karen Mason, Michael Reitsma and Jolynn Reitsma; foreground, Pierce Mettler and Alie Rudd (photo by Marjorie Rice).

Back in the early ’70s, Phoenix was a bit of a culinary wasteland. Finding a broad selection of quality ingredients could require multiple shopping forays — if they could be obtained at all.

Just three Valley shops sold a wide selection of cork-finished premium wines, according to Randy Mettler, one of several family members who own and operate Duck and Decanter, the venerable sandwich shop and food and wine retailer at 16th Street and Camelback Road.

“The first wine distributor opened up in the ’70s in Scottsdale, and Duck and Decanter was their fourth account,” he said. “It was the same with cheeses. There were just a few shops with a wide selection. Duck and Decanter made four.”

Putting together a charcuterie board also was a challenge. Hardly anyone knew what “charcuterie” meant, and finding ingredients — well, salami and ham were available, but asking for foie gras and cornichons would get you a blank stare.

So, 50 years ago this month, Earl and Dorothy “Dort” Mettler bought Duck and Decanter, a sandwich shop with some retail. George Matanovich started the business in 1968. Their family got into the fine food business because Earl was frustrated. “He would do culinary experiences on weekends,” said daughter Karen Mason. “Every Sunday there would be a fancy meal and he would have to go to five or six stores to get all the ingredients that he wanted.”

From the start, it was a family enterprise, with their children, Randy, Tod, Karen and Jolynn (now Jolynn Reitsma) pitching in.

“I was in eighth grade, Randy was in high school and Jolynn had a playpen under the register,” Karen said. “When she was about 6 or 7, we pushed a milk crate up to the register and she was doing quite well at handling customers.”

In 1985, the Mettlers moved “The Duck,” as longtime customers call it, from its original location on Camelback east of 16th Street to a new, purpose-built structure just down the road.

From the start, the shop was a magnet for food and wine enthusiasts.

“Mom and dad would go to the San Francisco food show every year and bring back treasures for the shop,” Randy said. “We would always be a year or two behind San Francisco, Chicago and New York, but we were quite a few years ahead here.”

“In our produce section we were bringing in kiwis and kumquats, rhubarb and star fruit — you couldn’t find any of that then,” Karen said. “Also, we were the only place that offered gourmet cooking equipment. I think we were the first people here to have an espresso machine.”

Today, the store has seating upstairs, with local art on the walls. Downstairs is a large deli counter and retail space.

Outside are several patios for al fresco lunches centered around “Nooners” — what The Duck calls its sandwiches. There’s also a small room next to the wine bar, which offers tastings as well as a wide selection of Arizona vintages.

Shoppers can find an equally wide choice of coffee and tea varieties along with pastas, preserves, breads and spreads as well as cheeses (managed by “cheesemonger” Allie) and sausages, terrines and other charcuterie.

The family has seen shifting trends in food and wine over the decades.

“Going back 50 years, you look at the quantity and quality of local bakers, winemakers — the change has been pretty fabulous,” Randy said. “Local production is just amazing.” 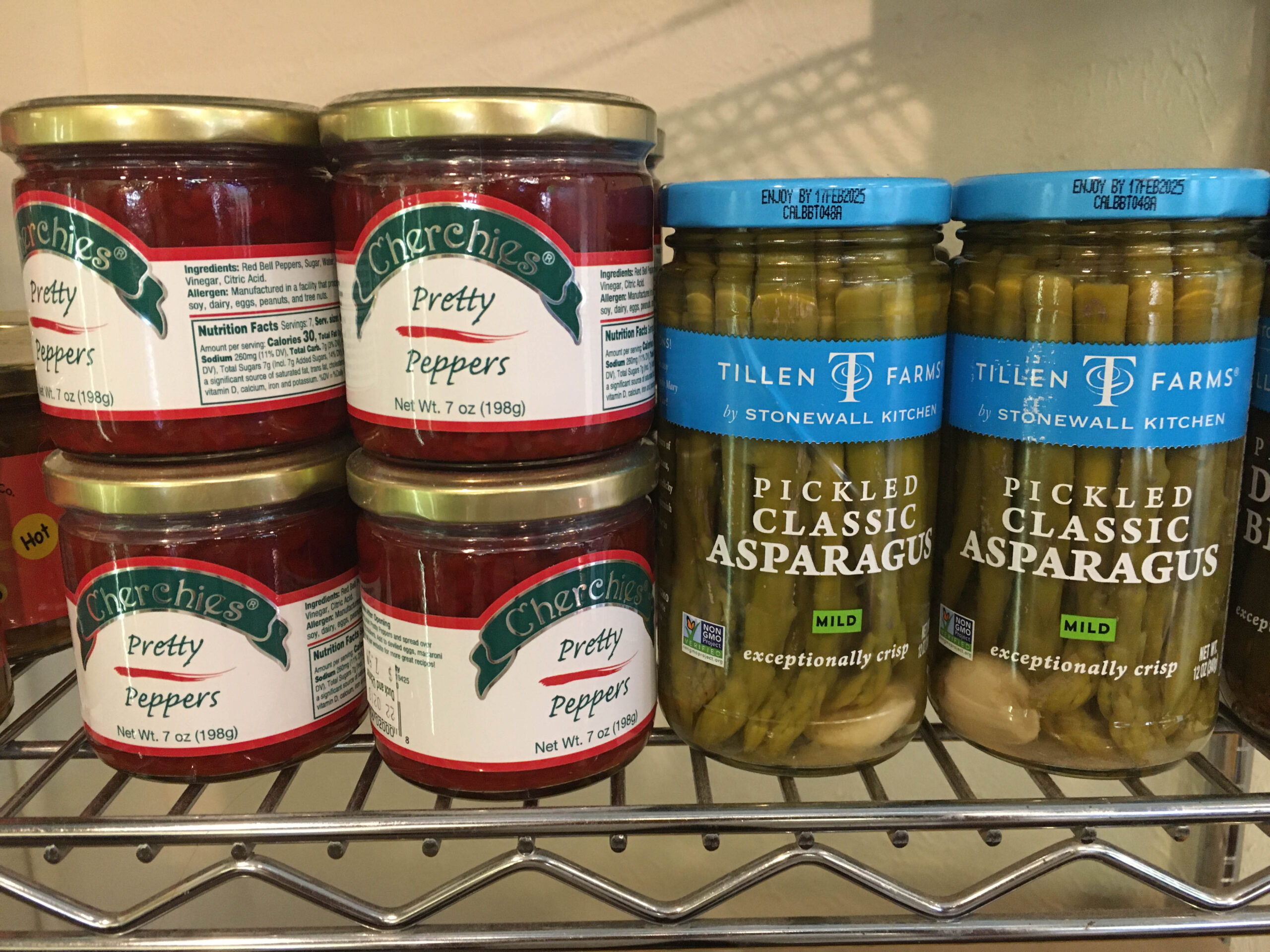 Shoppers will find a variety of flavorful items in Duck and Decanter’s retail area (photo by Marjorie Rice).

Their late brother Tod was instrumental in moving the store toward more local items.

“We had to make a decision, because most of our groceries were imported — the farther away it was, the more fancy we were,” Karen said. “We were importing raspberries from New Zealand in December. We were very proud of that.

“But now we’re proud of our selection of things that are produced and created within a hundred miles of us — seasonal, native food.”

At press time, the family still was finalizing plans for the 50th anniversary celebration, Nov. 26, the Saturday after Thanksgiving. There will be live music and food samples.

“Being so short-staffed, it’s taking all that we have just to keep the business sustainable,” Karen said.

“Mom and dad are excited about showing up for a couple of hours. We’ll have live music and food samples, and we know many of our long-time customers will be here. Many of them come in every single day.”

What’s next? Perhaps a food truck. Pierce’s eyes light up at the idea. But not yet.

“I look forward to the time when we can start doing more on growth and development,” Karen said. “But right now, we’re so short-handed, the business is running us rather than us running the business.”

Going forward? “I want us to continue to have the best sandwiches — the best ingredients — and the best service,” Jolynn said.

“Mom and dad were so excited about opening up this little gourmet store,” Karen said. “They treated customers with affection and love. That’s what we were raised in, and that’s what our children are raised in.”