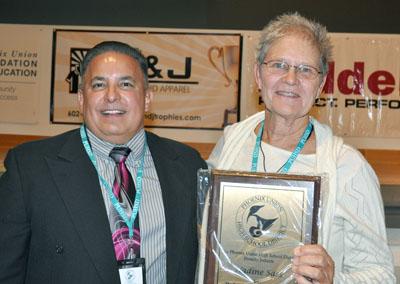 Forty-four charter members were on hand to represent athletes from Phoenix Union High School in the “Historical Era” from 1913 to 1981, as well as Phoenix Union High School “Historical Era” Coaches from 1913-1949, and “Modern Era Coaches” from 1950-present at various PUHSD schools. Local sportscaster Kevin McCabe provided the color and commentary.

“This has been a dream of mine for many years,” said Phoenix Union Athletic Director Zachary Muñoz. “Phoenix Union has a rich and successful tradition of championship teams, players and coaches, and we want to celebrate that, and preserve their legacies for years to come. There are so many that we had to play catch up for this first event.”

A committee made up of members of the high school sports community selected the inaugural class of 29 coaches and 16 athletes. While many of the inductees are from the original Phoenix Union High School, Muñoz will expand the Hall of Fame’s reach in coming years.

As a commitment to the legacy of athletic excellence in Phoenix Union, a Male and Female Athlete of the Year scholarship will be established by the PUHSD Sports Hall of Fame. Donations for the event and scholarships can be made to the nonprofit Phoenix Union Foundation for Education, c/o PUHSD Sports Hall of Fame, 7949 E. Acoma Drive, Suite 207, Scottsdale, AZ 85260.