It’s been a case of good news, bad news when it comes to the grocery shopping options available to North Central Phoenix residents.

The bad news was that after it was announced that Fresh & Easy Markets were acquired by The Yucaipa Companies LLC, there also was a statement released that some of the Fresh & Easy stores would be closing. Almost immediately, the store at 7th Street and Thunderbird Road shut it doors. This, just months after longtime market AJ’s Fine Foods went out of business, has left some area residents reeling.

But thus far, it appears that the markets at 12th Street and Northern Avenue, and 7th Avenue and Indian School Road, will remain open. 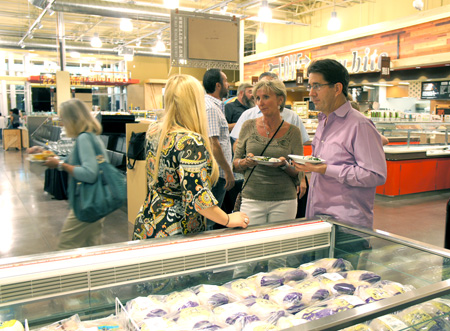 Yucaipa’s purchase is expected to be complete by the end of the year; in the meantime it is business as usual for most Fresh & Easy stores, which will continue to use the store “Friends” card and honor all coupons and reward points.

Also in the arena of bad news–the Wal-Mart Market, expected to open in the Sunnyslope community at Central and Dunlap avenues sometime in January 2014, has now been delayed until summer 2014. The reason, market officials say, is getting permits and other approvals through the sometimes-complicated city of Phoenix Development Services process.

But there is good news in the grocery shopping world, and that is the opening of the Whole Foods Market at 20th Street and Camelback Road, in the former home of Linens ’N Things. The store, known for its extensive produce department and all-natural meat and wild-caught seafood selections, welcomed its first customers on Sept. 18.

The store is 35,000 square feet and features two items unique to this location–a “wokeria,” where customers can order their own stir-fry bowl or wrap and have their choices of meat and vegetables cooked to order; and a full in-house bakery where breads, cakes, tarts and more will be made fresh on premises daily.

The store also features a casual lounge and restaurant called Twenty Highland Tavern, serving up several wines and dozens of beer on tap—with at least 20 local options—as well as mixologist-inspired cocktails and an extensive menu featuring local produce and sustainable meats, served inside and outdoors on a new patio.

The store sports a juice and smoothie bar, perfect for those morning meals on the go, as well as and a Specialty Coffee & Espresso Bar serving caffeine by the cup made from in-house roasted 100 percent Arabica beans.

The new Camelback store reflects the company’s mission of supporting locally sourced and locally made products, sustainable agriculture and the environment. That commitment is evidenced by its offerings from several local vendors and farmers including: Briggs & Eggers, Willcox Greenhouse, and Sunizona.

“We are excited to be able to serve our loyal customers in this beautiful new location and look forward to delivering an experience that truly sets Whole Foods Market apart from any other market,” said Mike Hardy, store team leader at Whole Foods Market Camelback.

For more information on Whole Foods Market’s Camelback store, visit www.wholefoodsmarket.com/stores/camelback or follow it on Facebook at: www.facebook.com/WholeFoodsMarketCamelback.