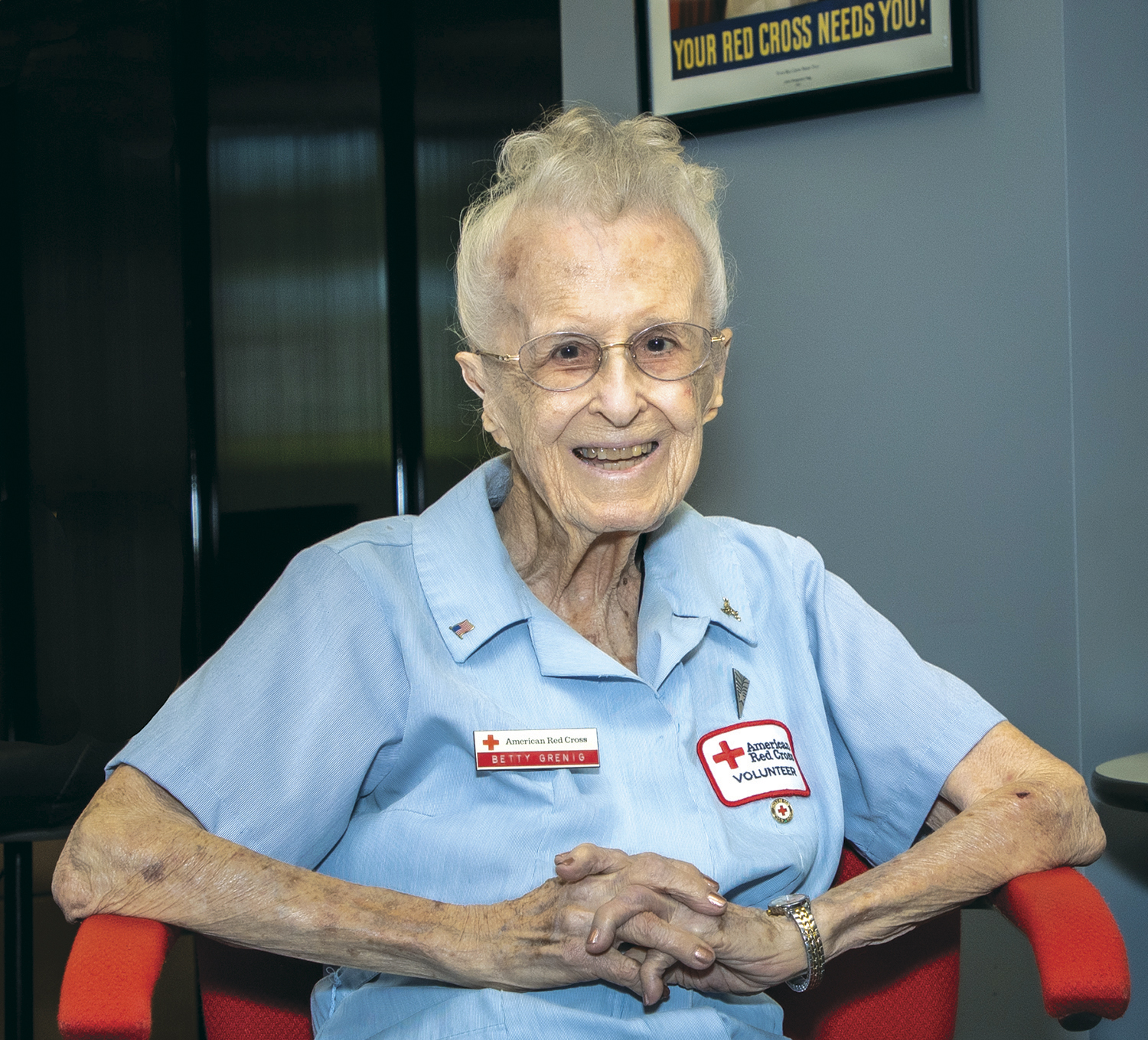 For Valley centenarian and longtime Red Cross volunteer Betty Grenig, participating in the Phoenix Veteran’s Day Parade will be a highlight of 2022 (photo by Roxanne Schorbach, courtesy of American Red Cross Central and Northern Arizona chapter).

“I’m going to ride in the Veteran’s Day Parade with the American Red Cross, and I’m going to hold my friend’s new baby, who will be born around the end of October,” she said, with the confidence and conviction that are her trademarks.

The Phoenix Veteran’s Day Parade was started in 1997, and it is the highlight of Grenig’s year. “We’ll step out at 11 a.m. on Nov. 11, which is highly significant. That is the day and time the peace treaty was signed that ended World War I,” she explained.

This year’s theme is “Liberty, Honor and Sacrifice,” and 15 marching units, 10 floats and 2,500 marchers will head south on Central Avenue from Montebello Avenue. The parade will end up on 7th Street at Indian School Road at about 1:30 p.m. Organizers expect about 45,000 spectators to line the route to honor America’s veterans.

Grenig knows all about honoring veterans. She started volunteering with the American Red Cross when she was 19 years old, and she still volunteers, at least once a week. Her husband, Robert, now deceased, was an Army veteran, and Grenig traveled with him to assignments all over the world. She volunteered with the American Red Cross wherever Robert was stationed. Once he retired and they moved to Arizona, she served at Williams Air Force Base in Mesa, then at Luke Air Force Base in Glendale. Three years ago, she moved her base of service to the Red Cross office in Central Phoenix.

Fellow volunteer and Air Force veteran Alex Reynosa will drive Grenig in the parade, piloting a Red Cross Emergency Response Vehicle usually reserved for delivering food and emergency supplies to disaster survivors. On this day, however, Reynosa and Grenig will lead volunteers in the trusty old workhorse, and American Red Cross volunteers of all ages will follow, some on foot, some in other Red Cross vehicles.

“The Red Cross is probably best known for our work in disasters like Hurricane Ian, where we have volunteers in Florida and Puerto Rico now, helping survivors with food, shelter and mental health and spiritual needs,” Reynosa said. “But Red Cross also serves U.S. military members, supporting them in many ways, including emergency messaging and getting them home when there is a family emergency.”

One retired Phoenix Police captain remembers that support all too well.

“The Red Cross got me home from Vietnam twice,” he remembered, through a few tears. “Twice within a year. First, for my dad’s last days, then, six months later, for my mom’s last days. I see that big, beautiful Red Cross on a vehicle or on a volunteer’s T-shirt and I get emotional. Those volunteers moved heaven and earth for me when I was a scared young soldier in the jungle.”

What is the police officer’s name? He grinned through his tears and said, “Doesn’t matter. I speak for every young kid who found a friendly face at the Red Cross over the many years.” 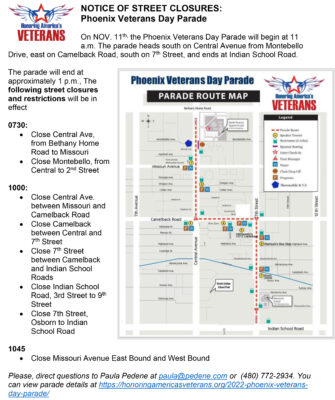 Click on the graphic to view the 2022 Veteran’s Day Parade route.

High school bands, veteran groups and members of American Red Cross Youth clubs will march in this year’s parade. The parade is managed and presented by Honoring America’s Veterans, a 501(c)3 organization headed by Paula Pedene, a Navy veteran.

“We’re so grateful for our sponsors, who make the parade possible,” said Pedene. “Their financial donations as well as their volunteer support honor our country’s veterans, and we could not have a parade without them.”

Besides the parade, Honoring America’s Veterans hosts a student essay contest. The winner will be announced at the parade festivities. Parade entries also will be judged, and winners announced.

But when asked if the parade is competitive, Red Cross volunteer and military spouse Pat Farmer said, “Not for us.” Her husband is a retired U.S. Army physician. “We’re all about service,” she continued. “Whether we’re assisting military members, recruiting blood donors, helping after a disaster or teaching CPR and water safety, we focus on service.

“We always welcome new volunteers,” Farmer added. “We’ll put you to work and guarantee you’ll feel good at the end of the day.”

Find information about the Veteran’s Day Parade at www.honoringamericasveterans.org. To volunteer with the American Red Cross, go to www.redcross.org.

Trudy Thompson Shumaker is a writer in Phoenix, Arizona.

Tagged On the cover