By Patty Talahongva
The Fry Bread House is returning to the Melrose District in late May. The new location will be at the southeast corner of 7th Avenue and Hazelwood. 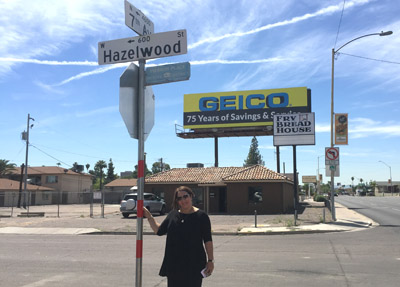 Sandra Miller, manager of the award-winning Fry Bread House, stands in front of the soon-to-be-opened new location back in the popular eatery’s old stomping grounds of the Melrose District. Her parents opened the first Fry Bread House in the Melrose area in 1992 but it moved into a bigger space on Indian School Road in 2013. The new Melrose location should open by the end of the month (photo by Patty Talahongva).

“We love Melrose! We wanted to move back into the neighborhood,” says Sandra Miller, manager. Unfortunately, the restaurant’s return has been slightly delayed by the unexpectedly heavy rainstorm in early April, which caused some water damage in the building. But the good news is the site was once a used car lot so there’s ample parking, something that is sometimes lacking in Melrose businesses.

Fry Bread House in 2012 won a coveted James Beard Foundation Award in the “America’s Classics” category and business swelled. The family-owned restaurant was suddenly on the list of seemingly every foodie in America. That prompted the owners to move to a larger location on 9th Street and Indian School Road.

Sandra’s parents, Joedd and Cecelia Miller, moved to the area 45 years ago and raised their eight kids in the Melrose District, which lies along the stretch of 7th Avenue between Camelback and Indian School roads.

“It’s where we grew up, we rode the bus, we ate at local places,” Sandra explains. Her parents opened their first restaurant in 1992.

“Our first place had four small tables, our second had 13, our fourth had 35 tables,” she recalls. This new location will have 25 tables and she says that’s just right. Eventually an outdoor patio will be built with shade provided by ocotillo cacti. The design will be O’odham style with desert landscaping.

Cecilia Miller is a member of the Tohono O’odham tribe located in southern Arizona. The dishes served at the restaurant are all based on her recipes. Guests are treated to red and green chili stews, burritos and tacos all made with either the traditional fry bread (hand stretched dough that is deep fried) or chumuth, the O’odham version of a flour tortilla.

Entrees start at around $6 with the most expensive, the Ultimate Taco stacked with refried beans, your choice of beef, onions, sour cream, cheese and lettuce, selling for $8.99. Modest pricing is one of the criteria for the James Beard Classics category. The Joedd Special, named after the family patriarch, is just $7.99. It’s a piece of fry bread or chumuth served with a stew.

“We could be a chumuth factory,” Sandra laughs. The restaurant goes through dozens of chumuth each day because it is a customer favorite. You can also buy chumuth by the dozen by ordering 24 hours in advance. It costs $15 a dozen.

Because customers have asked about a chicken option, the family is trying out a few chicken dishes. “You’ll be able to order red chili chicken,” Sandra says. And fair warning, the recipes are true to the O’odham culture. “If we tell you it’s hot, it’s hot!” she laughs. So if you can’t stand the heat … well, you shouldn’t order the chili.

Vegetarian options include a corn tamale, veggie taco or tamale. The kids menu includes Coyote Coins, which are silver dollar-sized pieces of fry bread that come with mashed refried beans for dipping. Other kids’ meals are the Quail Cheezy Melt or Desert Bears that both sell for $4.75.

Sandra and her mother are excited to be heading back to the Melrose District. They know their James Beard fans will find them when they come to Phoenix. “We still get customers from all over the world,” Sandra points out. And she urges her staff to ask customers where they’re from and how they heard about the Fry Bread House. Look for the coveted medal to be on display in the restaurant’s new home. For now, it’s safely on display in Cecilia’s bedroom.

The Fry Bread House will be closed on Sundays; otherwise, you can try these unique dishes from 10 a.m. to 7 p.m. Monday through Saturday. Follow them on Facebook or call 602-626-4124.